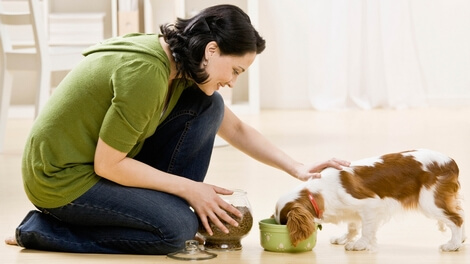 On June 27, 2019, the FDA published its third status report regarding a potential connection between grain-free diets and a type of heart disease in dogs known as dilated cardiomyopathy… or DCM.

The Agency released a Question and Answer update on July 29, 2021, about the potential non-hereditary causes of DCM.

The Dog Food Advisor initially alerted readers about this issue on July 12, 2018, the day it was first announced by the FDA… and continues to update this report on an ongoing basis.

Link to Grain-Free Dog Food
Still Not Conclusive — No Recalls

The FDA has still not discovered why certain dog foods may be associated with the development of DCM. In fact, the Agency now believes the connection between diet and DCM is a complex scientific issue involving multiple factors.

Results of the study remain inconclusive… and there have been no recalls.

“It’s important to note that the reports include dogs that have eaten grain-free and grain containing foods and also include vegetarian or vegan formulations. They also include all forms of diets: kibble, canned, raw and home-cooked.

“Therefore, we do not think these cases can be explained simply by whether or not they contain grains, or by brand or manufacturer.

“… the FDA has received reports about 560 dogs diagnosed with DCM suspected to be linked to diet. Tens of millions of dogs have been eating dog food without developing DCM.”

Which can lead to an enlarged heart and congestive heart failure.

Although the root cause of DCM remains unknown…

The FDA has received reports of DCM in a wide range of breeds, including many not genetically prone to the disease. 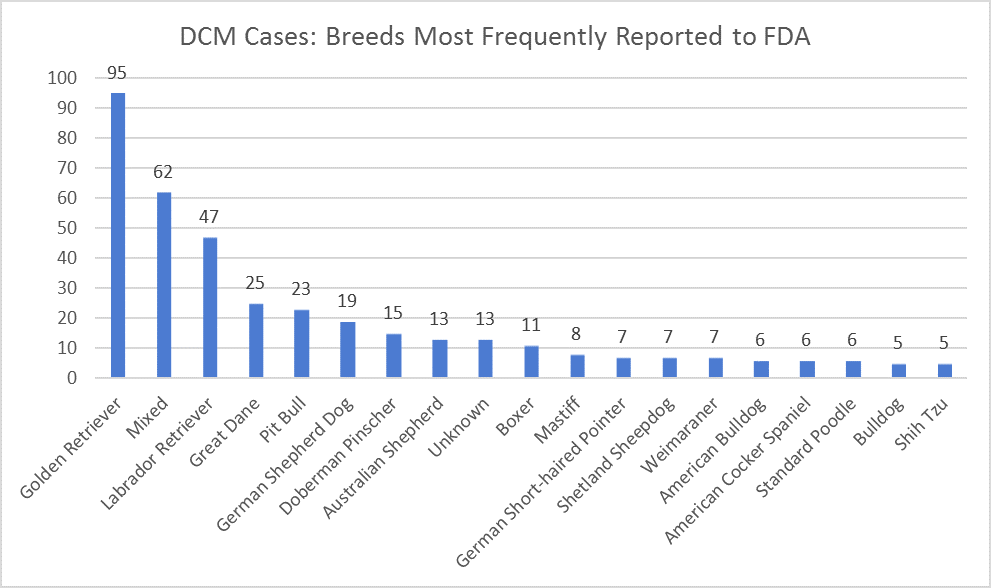 Historically, DCM has been primarily linked to a genetic predisposition in certain breeds, but emerging science appears to indicate that non-hereditary forms of DCM occur in dogs as a complex medical condition that may be affected by the interplay of multiple factors such as genetics, underlying medical conditions, and diet. Aspects of diet that may interact with genetics and underlying medical conditions may include nutritional makeup of the ingredients and how dogs digest them, ingredient sourcing, processing, formulation, and/or feeding practices.

Since announcing its investigation in July 2018…

FDA researchers have observed that most of these DCM cases were associated with animals eating dry dog foods.

Researchers found that over 90 percent of the reported recipes were grain-free. And yet some dogs consumed diets that contained grain, too.

Brands named most frequently in these reports are depicted in the graphic. Could the presence of these brands simply be related to their exceptional popularity?

Click here for a more detailed account of all DCM cases reported to the FDA as of April 30, 2019. 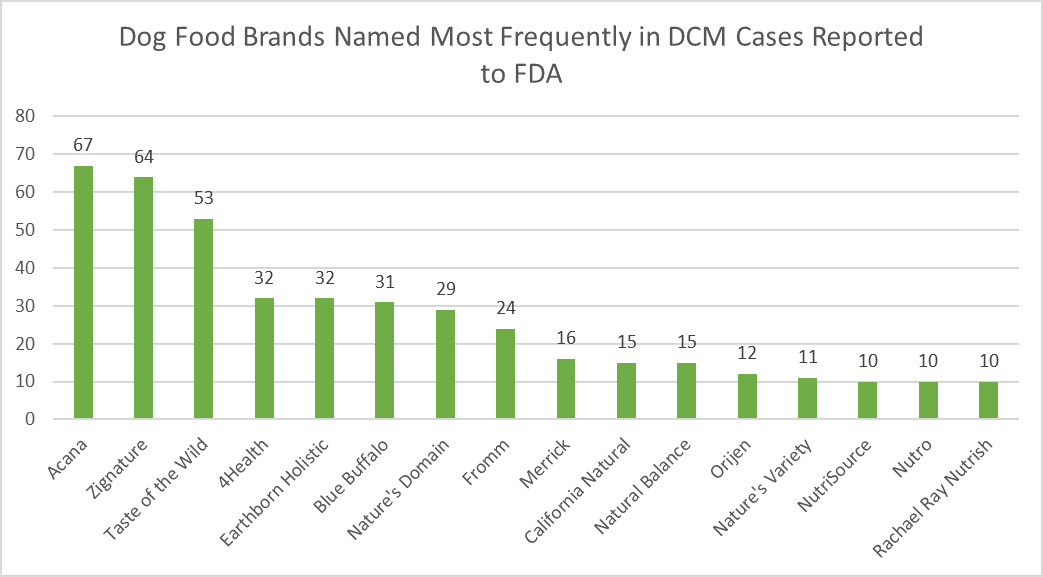 The FDA offers the following observation…

“The prevalence of reports in dogs eating a grain-free diet might correlate also to market share: these products have become exceedingly popular over the last several years.”

Even though it’s not clear exactly what it is about these diets that may be connected to DCM in dogs, there are a number of possible causes.

Taurine deficiency is a well-documented, potential cause of some cases of DCM. Yet it’s not likely to be the only cause.

According to Dr. Lisa Freeman, a veterinary nutritionist at Tufts University, “most dogs being diagnosed with DCM do not have low taurine levels”.

It’s not reasonable to assume a taurine deficiency is the definitive cause of DCM.

According to the FDA, researchers have uncovered one dietary feature common to a large number of DCM cases…

“The common thread appears to be legumes, pulses (seeds of legumes), and/or potatoes as main ingredients in the food. This also includes protein, starch and fiber derivatives of these ingredients…

“Some reports… indicate that the pets were not eating any other foods for several months to years prior to exhibiting signs of DCM.

Until the FDA completes its study and releases its final report…

The Dog Food Advisor believes it makes sense to apply science and logic to all your feeding decisions.

So, consider these practical tips…

Final results are still not conclusive.

And there’s no way to know how long the FDA’s investigation will take. Yet the Agency is hopeful that as more data becomes known, its scientists will gain a better understanding of the possible connection between diet and DCM.

Until we know the answer…

And don’t be frightened by all the well-meaning yet misguided advice you’ll surely encounter on the Internet.

Or the faulty counsel offered by too many uninformed professionals.

Base Your Feeding Decisions
on Facts… and Science

For the safety and well-being of your pet, the process of choosing dog food must always include…

Our ratings are heavily weighted in favor of our estimate of each recipe’s apparent meat content.

Ratings are automatically reduced anytime we find excessive amounts plant-based protein “boosters” (like peas, legumes or non-meat protein concentrates) too close to the top of any ingredients list.

And they’re made by some of the most respected companies in the USA and Canada.

We’re confident the industry will quickly adapt its recipes to any decisive conclusions reached by the FDA’s future findings.

And of course, we’ll make any relevant adjustments to our content as needed to reflect these scientific findings (once they become available).

Since there’s no such thing as a perfect dog food…

And because built-in flaws tend to be magnified when the same food is fed endlessly… day after day for a lifetime.

You may wish to consider diet rotation when feeding your pet.

We can update you the moment the FDA releases its findings.

It appears the FDA may have been premature in warning the public about the possible link between DCM and grain-free diets.

“The study published June 15 in the Journal of Animal Science and conducted by veterinarians, veterinary cardiologists and animal nutritionists at consultancy BSM Partners, was a literature review comprising more than 150 previous studies on canine nutrition and its relationship to DCM.

“The first paragraph of the authors’ conclusion is worth quoting in full:

“Recently, a correlation between diets with specific characteristics, such as, but not limited to, containing legumes, grain-free, novel protein sources and ingredients, and smaller manufactured brands, to DCM has come under scrutiny by academic researchers and FDA. The use of the acronym “BEG” and its association with DCM are without merit because there is no definitive evidence in the literature. At this time, information distributed to the veterinary community and the general public has been abbreviated synopses of case studies, with multiple variables and treatments, incomplete medical information and conflicting medical data and opinions from veterinary nutrition influencers. Also, in past literature, sampling bias, overrepresentation of subgroups and confounding variables in the data weaken this hypothesis. Additionally, based on current literature, the incidence of DCM in the overall dog population is estimated to be between 0.5% and 1.3% in the United States. However, the FDA case numbers (560 dogs) are well below the estimated prevalence. Therefore, it is impossible to draw any definitive conclusions, in these cases, linking specific diets or specific ingredients to DCM.”

“In summary, no scientific research provides proof of a link between DCM and specific types of pet food, or even the “BEG” (boutique, exotic protein and grain free) term invented by some veterinarians; the case studies, data and other information related to the DCM cases in the FDA investigation are not at all complete and, in some cases, even conflict; and previous studies related to DCM have research problems that “weaken this hypothesis” of a correlation between DCM and specific types of pet foods.”

Most of the diets associated with the reports of non-hereditary DCM have legume seed ingredients, also called “pulses” (e.g., peas, lentils, etc.), high in their ingredient lists (although soy is a legume, we did not see a signal associated with this ingredient). These include both “grain-free” and grain-containing formulations. Legumes, including pulse ingredients, have been used in pet foods for many years, with no evidence to indicate they are inherently dangerous, but analysis of data reported to CVM indicates that pulse ingredients are used in many “grain-free” diets in greater proportion than in most grain-containing formulas. FDA has asked pet food manufacturers to provide diet formulations so we can further understand the proportions of ingredients in commercially-available diets and possible relationships with non-hereditary DCM.

The FDA does not know the specific connection between these diets and cases of non-hereditary DCM and is continuing to explore the role of genetics, underlying medical conditions, and/or other factors.

In the beginning, many scientists believed DCM was caused by deficient dietary taurine. Until that theory was disproven.

Then, DCM was supposedly caused by boutique diets.

But now, some are convinced that DCM is caused by the mere presence of peas in a food.

What about the dose? Shouldn’t the amount matter, too?

Shouldn’t concerns about peas and other legumes also focus on the amount and mix ratios of these ingredients? Should dried pea protein (a plant-based protein concentrate) be treated the same as small amounts of peas in a food?

There are still so many questions to answer.

The jury is still out.

Before you decide what action to take, we still believe it’s worth waiting for more definitive guidance from the FDA.

Until then, if you’re still concerned…

Consider choosing one of the many grain-inclusive options on our “Best Dog Foods” pages. We provide a mixture of both grain-free and grain-inclusive recipes on every list.

That way, you can choose the type of foods you trust… and avoid the ones you don’t.

Or follow our recommendations about the benefits of diet rotation. By periodically switching dog foods, you can minimize the unhealthy consequences of serving imperfect products.

Did Industry Funding
Influence the Investigation?

An extensive report conducted by investigative journalists found potential conflict of interest in the studies associated with this subject.

“In 2018, the U.S. Food and Drug Administration, acting on input from a group of veterinary researchers, began investigating whether the increasing popularity of grain-free dog foods had led to a sudden rise in a potentially fatal heart disease in dogs, dilated cardiomyopathy.

“Four years later, the FDA has found no firm link between diet and dilated cardiomyopathy. Nor has it rejected such a link, and the research is ongoing. Publicity surrounding the suspected link, nevertheless, has driven down the once-promising market for grain-free dog foods.

“Furthermore, a tangled web of pet food industry funding and interests may have influenced the origin, data collection and course of the FDA study, according to an examination of internal FDA records and extensive reporting.

“A six-month investigation by 100Reporters has found that veterinarians who prompted the FDA to consider diet have financial and other ties to the leading sellers of grain-inclusive pet foods. Additionally, agency records show that for the initial study, some vets were instructed to submit only dilated cardiomyopathy (DCM) cases that implicated grain-free, “exotic” or “boutique” pet foods. Suppliers of ingredients used in grain-free dog foods have also exerted pressure on the FDA to protect their market.”

In the meantime, take the time to read this growing list of controversial articles and references.

DCM and grain-free pet foods: 3 strikes and you’re out!